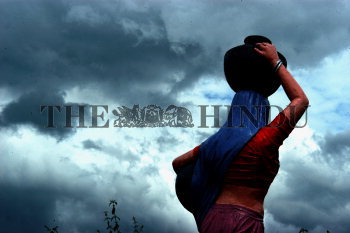 Caption : The dark monsoon clouds sighted over the Malampuzha dam in Palakkad district can hardly hide the ground reality as to how the drought-prone district in the north of Kerala has suffered due to poor water managment policies. Even now, long distances are being trekked for fetching drinking water in many parts of the district. Whatever gains may have been made from normal rainfall during the southwest monsoon that ended on September 30, 2005 is under threat of being undone by the northeast monsoon, which has run up to a deficit of 40 per cent as on November 2, 2005. The season lasts till December 30, 2005, but there is no guarantee that the dreams of weather-scarred Palakkad farmers that sprouted from a successful June-September season, will end happily. Photo: K.K. Mustafah 09/11/2005