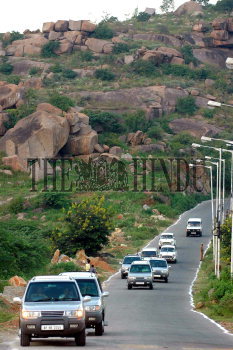 Caption : The AP Chief Minister, Y. S. Rajasekhara Reddy's MOTORCADE passes through the hilly stretch of Jubilee Hills behind Padmalaya Studios on way to Gachibowli for the inauguration of the 45th Indian Open National Athletics Meet on November 07, 2005. Incidentally, this is the first time a Chief Minister's convoy passed through this route which has very little movement by way of traffic and general public, but the City Police gives green channel for all VVIP's convoys to drive via Cyber Towers - Botanical Gardens to reach Gachibowli. Incidentally, the infamous Suri bomb blast site in which many people were killed also happens to be on this hilly route. Photo: Mohammed Yousuf