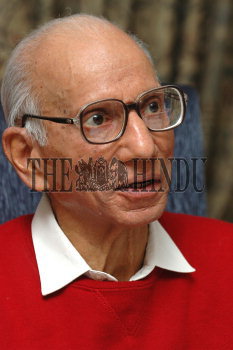 Caption : Former Chief Justice, R.S. Pathak, who will be heading the one-man judicial commission to probe Natwar Singh's involvement in Volcker Committee issue, seen at his residence in New Delhi on November 7, 2005. The Union Minister Natwar Singh's (not in pic) name has been mentioned in the UN-sponsored Volcker Committee report as the beneficiaries of Iraqi oil pay-offs. Photo: Rajeev Bhatt