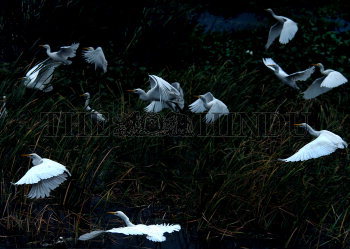 Caption : Flocks of migrating birds are a rare visual treat in Pallikaranai marsh land. The ecological balance is threatened due to extreme pollution caused by dumping and burning of garbage in the `Pallikaranai wetlands', which was earlier a haven for all varieties of birds, and now declared as forest land. Photo: Shaju John, 07/11/2005.