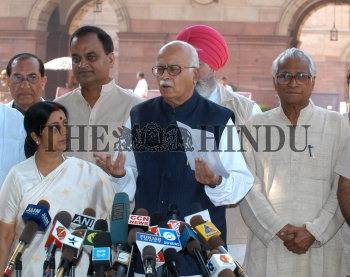 Caption : National Democratic Alliance (NDA) leaders led by the Leader of the Opposition in the Lok Sabha and former Deputy Prime MINISTER, L.K. Advani along with the NDA Convenor, George Fernandes and other NDA leaders is addressing the Media after submitting a memorandum to the President, demanding the resignation of the Union EXTERNAL AFFAIRS MINISTER, Natwar Singh at Rashtrapati Bhavan in New Delhi on November 07, 2005. Photo: Shanker Chakravarty