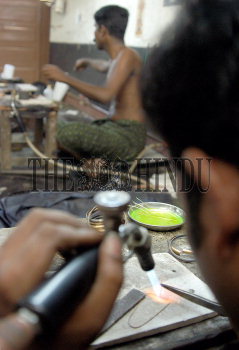 Caption : A goldsmith at work in an gold ornament manufacturing unit, at Thrissur. When men move away from traditional skilled jobs ornament-making sector sees a rush of men to embrace it. Ornament-making was the forte of a select few and was usually handed over from father to son, dominated by the `Thattan' (goldsmith) community. Attractive wages and other benefits have lured youth from other communities to this booming sector where an estimated four lakh people are employed. Photo: K.K. Mustafah, 07/11/2005.