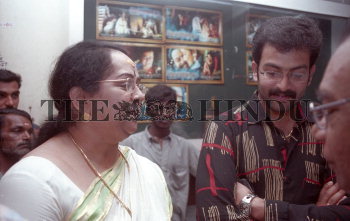 Caption : Actor Prithviraj and his mother Mallika Sukumaran at the release of his new film `Ananthabhadram' at Seethas Theatre in Alappuzha on November 03, 2005. The film is screened at this theatre using digital transmission, for the first time in the State film industry. The digital format of the film was uplinked at Mumbai and downloaded at the theatre using a decoder. Photo: Johney Thomas