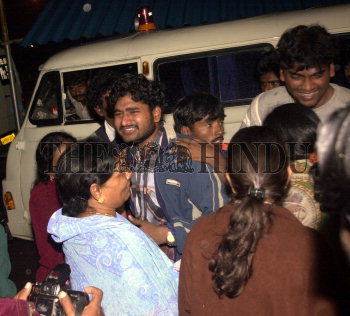 Caption : Relatives of the victims of the Valigonda train Accident grieve at the sight of the dead bodies of their beloved ones, when the bodies arrived at Secunderabad Station on October 29, 2005. Seven coaches of Repalle-Secunderabad Delta Fast Passenger train derailed and fell into a rivulet between Ramannapet and Valigonda stations in Nalgonda District, 80 km from Hyderabad, on the early hours of October 29. The first seven cars of the train fell into the water due to breaches on the track caused by waters gushing from four overflowing reservoirs following incessant rains in the region over the last two days. More than 100 passengers are reported dead in the incident. Photo: D. Gopalakrishnan