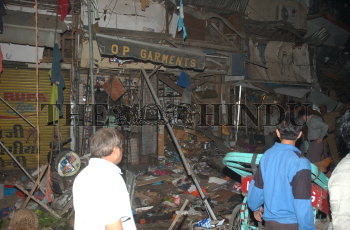 Caption : The bomb blast site at Paharganj market area in New Delhi on October 29, 2005. At least 70 persons were killed and several injured in three powerful serial explosives in New Delhi on October 29. The first explosion took place around 5.25 p.m. at Chheh Tuti Chowk in Paharganj at Central Delhi, the second explosion took place around 5.40 p.m. inside a Delhi Transport Corporation bus at Govindpuri in South Delhi and the third and most powerful one at 5.45 p.m. at the Sarojini Nagar market in South-West Delhi. Photo: R.V. Moorthy