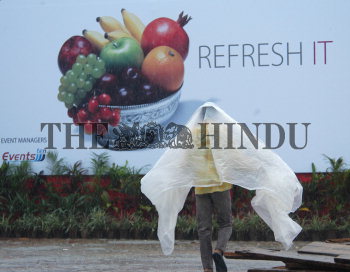 Caption : A daily wage labourer passing in front of a hoarding outside the Bangalore IT.IN 2005 premises at Palace Grounds in Bangalore on October 25, 2005. It will be inaugurated on October 26. 150 Indian companies, 120 foreign companies, including big names as IBM, HP, Motorola, TCS etc. will participate in the event. 16 countries and 16 Indian states will take part in the event. Photo: G.R.N. Somashekar