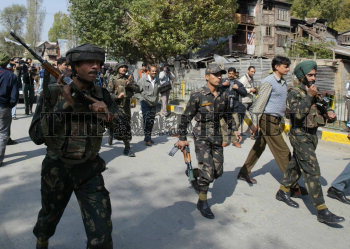 Caption : Army soldiers rush to secure the site where militants are holed up in Tulsi Bagh area of Srinagar on October 18, 2005. Militants shot and killed the Jammu and Kashmir Education Minister Ghulam Nabi Lone at his home during a brazen raid on a high-security neighbourhood that also left at least three other people dead and eight injured. Photo: Nissar Ahmad