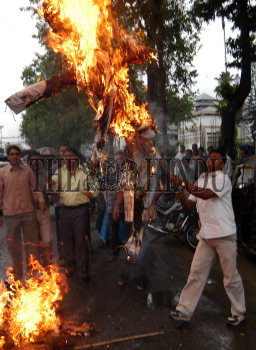 Caption : Activists of Asom Gana Parishad (Progressive) burn the effigies of the Assam Chief Minister, Tarun Gogoi and Assam Home Minister Rekebul Hussain in protest against the ethnic violence in Karbi Anglong district of central Assam in Guwahati on October 18, 2005. Ethnic violence among the Dimasa and Karbi communities led to the death of 34 people and more than 30 houses were reduced to ashes in Karbi Anglong district of Assam on October 17, 2005. BJP along with other political parties have demanded the imposition of President's Rule in Assam as the Tarun Gogoi-led Congress government has failed to maintain law and order in the State. Photo: Ritu Raj Konwar