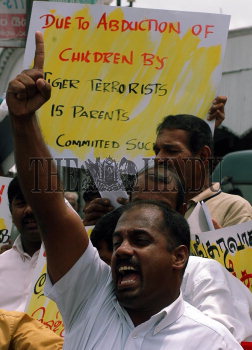 Caption : Anti-LTTE protest demonstration in progress, organised by Ceylon Teachers Union in Colombo on October 18, 2005 in protest against the killing of two PRINCIPALS in the North by LTTE. Photo: Sriyantha Walpola