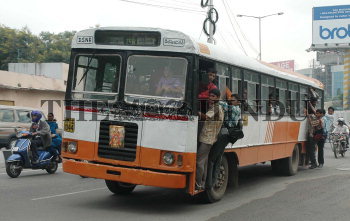 Caption : The Andhra Pradesh State Road Transport Corporation (APSRTC) Joint Action Committee Employees union called for an indefinite strike from October 18, 2005, owing to failure of talks with the Government and only a few hired buses were operated in the twin cities. Photo: Mohammed Yousuf