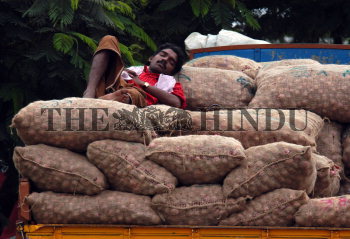 Caption : A scene at the Shaktan Thampuran Vegetable Market at Thrissur. Onion ranks first in export of fresh vegetables from the country and constitutes 73.94 per cent of the 8.6 lakh tonnes worth Rs. 715.87 crores of export. It constitutes around 8.2 per cent of the total cropped area covered under vegetable crops and it shares 6.0 per cent of the country's vegetable production. India is the second largest onion producing country in the world with the annual production of 5.25 million tonnes from an area of 0.49 million hectares. Photo: K.K. Mustafah. 18/10/2005.