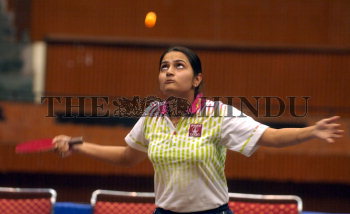 Caption : Vishakha Bijoy, who won the women's singles title, in action against Poulomi Ghatak (not in pic) during the final of the All India inter-institutional table tennis championship at the NDMC Indoor Stadium in New Delhi on October 14, 2005. Photo: R.V. Moorthy