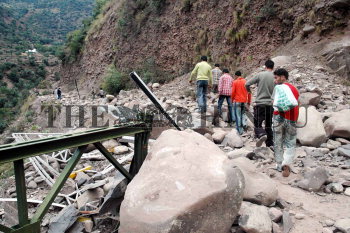 Caption : Kashmiri earthquake survivors with relief material walk along the Srinagar-Muzaffarabad road, that was blocked by a landslide triggered by the October 8, 2005 earthquake, near Kaman Post, (LoC) Uri Sector, some 130 kms. north of Srinagar on October 14, 2005. The town of Uri is one of the most affected areas by the 7.6 magnitude earthquake. At least 1340 people are feared killled by the earthquake in Jammu and Kashmir. Photo: Nissar Ahmad