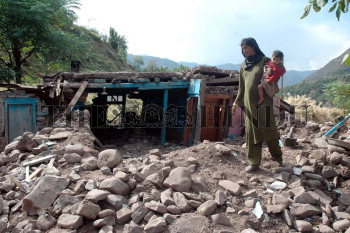 Caption : Kashmiri earthquake survivor near her house which was damaged in earthquake in Gowalata Near Kaman Post (LOC) Uri, some 130 kms north of Srinagar on October 14, 2005. The town of Uri is one of the most affected areas by the 7.6 magnitude earthquake . At least 1340 people are feared killled by the earthquake in J