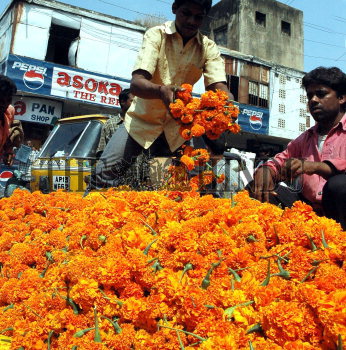 "AYUDHA POOJA" FLOWERS ARE IN DAMAND

Caption : With the increasing demand for flowers on the eve of "Ayudha Pooja" on October 11, 2005, the vendors at the wholesale flower market in Jambagh, Hyderabad, eagerly selling marigolds and crysanthemums which are offered in prayers to goddess Durga on October 10, 2005. The farmer comes to the city from neighbouring villages in Ranga Reddy district of Andhra Pradesh for direct sales at a price of Rs. 50 to Rs. 190 per kilogram. According to traders, the State also importing 10 tonnes of marigolds from Hosur and Bangalore regions in the neighbouring Karnataka State to meet the rising festival damand. Photo: Mohammed Yousuf