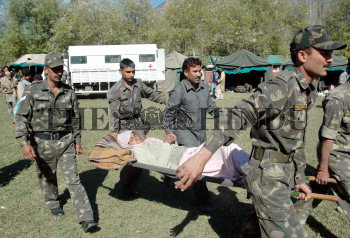 Caption : Army paramedicos carrying a woman, injured in an earthquake, for treatment, at an Army hospital, in Uri sector, about 110 kilometres north of Srinagar, on October, 10, 2005. Soldiers and volunteers used bulldozers and bare hands to pull out the survivors and bodies from the rubble of houses and buildings, toppled by the powerful earthquake in South Asia that killed 600 people in India's portion of the Kashmir region. Photo: Nissar Ahmad