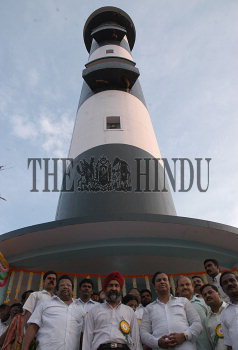 Caption : Union Minister for Shipping, Road Transport AND Highways, T.R. Baalu is looking at, after having inaugurated the Palk Bay Light House at Manamelkudi in Pudukottai district on October 09, 2005 AND the Director General of Light Houses AND Light Ships, Manmohan Singh Suman (middle) are also seen in the picture. Photo: M. Moorthy