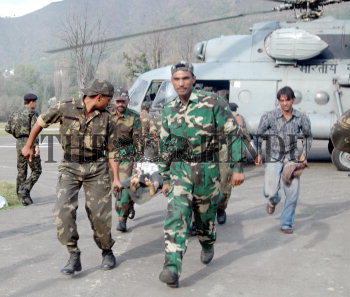 Caption : Army soldiers carry an injured person on a stretcher after airlifting him for treatment from Uri to Srinagar, on October 8, 2005 when a powerful earthquake jolted South Asia killing at least 190 people in the Indian-controlled portion of Kashmir, a senior official said. Photo: Nissar Ahmad