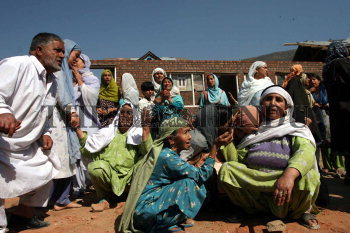 Caption : Kashmiri Muslims weep and pray as they took shelter in an open ground after an earthquake in Baramulla, north of Srinagar on October 08, 2005. A powerful 7.6-magnitude earthquake rocked South Asia on October 8, 2005, killing at least 21 people and injuring hundreds in Pakistan, India and Afghanistan. Photo: Nissar Ahmad