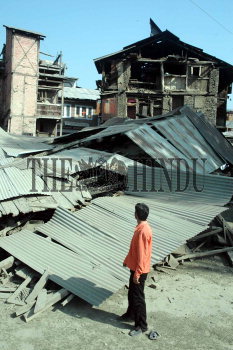 Caption : A Kashmiri walks in front of a damaged house after the earthquake in Srinagar on October 08, 2005. A major earthquake shook cities and villages across the south Asian subcontinent on October 8, 2005, including the Pakistan capital Islamabad where scores of people were feared killed or trapped when two buildings collapsed. Photo: Nissar Ahmad