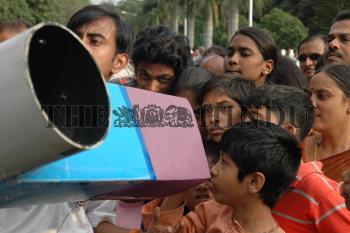 Caption : Large number of people gathered at the Jawaharlal Nehru Planetarium, in Bangalore on October 03, 2005, to view the annular solar eclipse that starts on the Atlantic Ocean at 13:06 (IST). The shadow of the moon moves along on to Africa, Arabian Sea and ends in the Indian Ocean at 18:57 (IST). India will witness only partial eclipse. It is only 39% in Bangalore. Photo: K. Murali Kumar