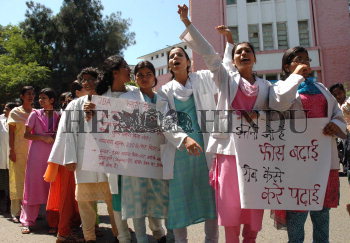 Caption : Junior doctors taking out a protest rally in Bhopal on October 04, 2005, during their indefinite strike. More than1500 junior doctors of five medical colleges, in Madhya Pradesh have gone on an indefinite strike, on October 03, 2005, demanding increase in their stipend from Rs 12,000 to Rs 18,000 and reducing the tuition fees from Rs 45,000 to Rs.10,000 in medical colleges. Photo: A.M. Faruqui