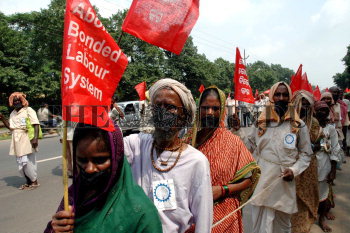 Caption : Activists of Ambedkar-Lohia Vichar Manch, Orissa, along with the tortured barbers of Bhubanpati village in Puri district are on a silent protest march to State Secretariat, in Bhubaneswar, on October 04, 2005, demanding abolition of 'Forced Labour' and arrest of the accused persons. Photo: Ashoke Chakrabarty