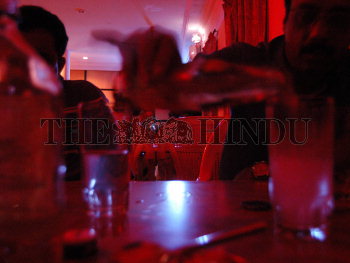 Caption : An inside view of a bar in Kochi city. An estimated Rs. 83.63 crores worth liquor was sold in Kerala during the Onam week, making the State the number one consumer of liquor in the country. This is a Rs. 11.73 crores increase from last year's Rs. 72.10 crores worth liquor consumption. The maximum sales were recorded during the Puradam and Uthradam days. Photo: K.K. Mustafah. 03/10/2005.