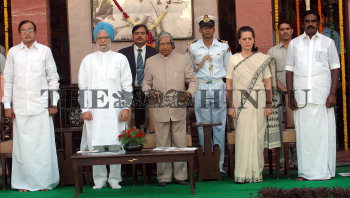 Caption : The President, A.P.J. Abdul Kalam (third from right), along with (from left) the Union Minister for Finance, P. Chidambaram, the Prime Minister, Manmohan Singh, the Congress president and UPA chairperson, Sonia Gandhi and the Union Minister of State for Revenue, S.S. Palanimanikkam, at a function to release commemorative coins marking the 75th anniversary of the Dandi March, in New Delhi during Gandhi Jayanthi celebrations (136th birth anniversary of Mahatma Gandhi) on October 2, 2005. Photo: Sandeep Saxena