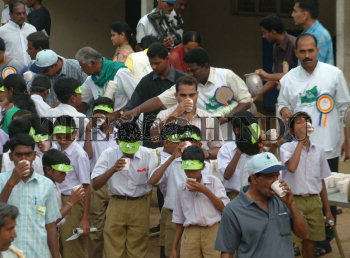 Caption : Participants quench their thirst at a booth set up by the grape growers during the 'Noyyal Yatra' in Coimbatore on October 2, 2005 organised by Siruthuli, a public initiative to desilt tanks and canals for recharging ground water, at the launch of it's Rs. 25-crore programme to revive the Noyyal river through improvements in four phases. Photo: K. Ananthan