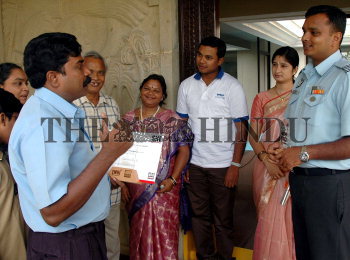 Caption : Squadron Leader T. Srinivasulu (ext right) and train driver G. Meher Babu (ext left), two of the recipients of the Selfless Heroism in Emergency (SHE) award presented by the Emergency Management and Research Institute (EMRI), share their experiences at the Awards function in Hyderabad on October 2, 2005. Srinivasulu, who was posted in Car Nicobar on December 26, 2004 when killer tsunami struck, swam 200 feet into the murky waters, clung to a tree for 45 minutes and rescued seven persons who were caught in the killer waves and saved a child from getting washed away. On April 4 this year, Babu saved the life of several passengers when he applied emergency brakes of the train, got down and removed 15 feet iron pipes that were lying across the railway tracks. Photo: Mohammed Yousuf