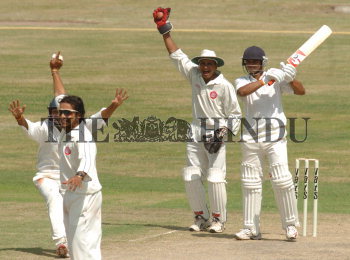 Caption : Murali Kartik of Railways appeals successfully for a catch against Rest of India batsman Suresh Raina as wicketkeeper Sudhir Wankhede (who took the catch) and fielder Vineet Saxena join him during the Irani Cup cricket match between Railways and Rest of India at the Karnail Singh Stadium in New Delhi on October 1, 2005. Photo: V.V. Krishnan