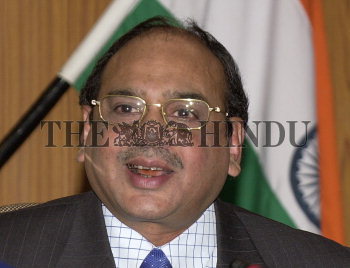 Caption : The Central Bureau of Investigation (CBI) Director, U.S. Misra, at a press conference at the CBI headquarters in New Delhi on September 30, 2005. The press conference was about the Nation-wide raids conducted across the country by the CBI on September 30. In a major countrywide anti-corruption drive, CBI raided the homes and offices of over 50 Government officials, in 90 places across the country. The cities where the raids took place include Delhi, Mumbai, Chennai and Kolkata. Photo: Rajeev Bhatt