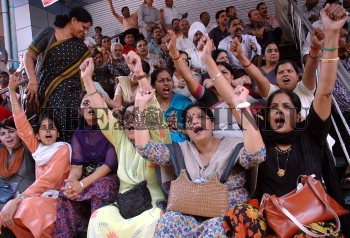 Caption : Bank employees shouting slogans outside the State Bank of India's Parliament Street Branch in New Delhi on September 29, 2005. The employees boycotted the office in support of the Nation-wide strike called by the Left-backed Trade Unions against Privatisation and other alleged anti-people policies of the UPA Government. Photo: Sandeep Saxena