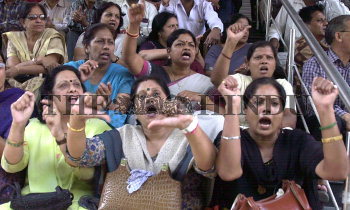 Caption : Members of the All India Co-ordination Committee of Union in Financial Sector (Delhi State) participating in the nationwide strike called by the Left Parties outside the State Bank of India in in New Delhi on September 29, 2005. Photo: Ramesh Sharma