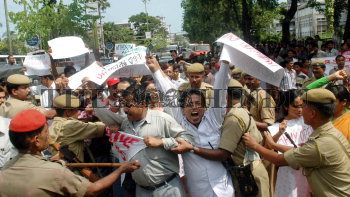 Caption : People protesting to stop Army operations against the United Liberation Front of Asom (ULFA) militants in the Dibru Saikhowa National Park in Guwahati on September 29, 2005. The People's Committee for Peace Initiative has called for a twelve hours Assam bandh on September 29, demanding suspension of Army operations for creating a congenial atmosphere for talks with the militant outfits. Photo: Ritu Raj Konwar