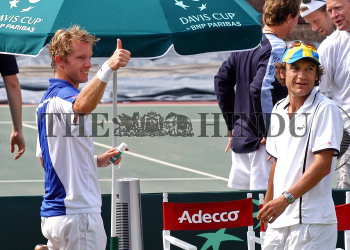 Caption : Thomas Johansson of Sweden does a thumps up to the crowd, watched by non-playing captain Mats Wilander, after winning the reverse singles tennis match against India's Prakash Amritraj in the Davis Cup World Group play-off tie at the R.K. Khanna Stadium in New Delhi on September 26, 2005. Photo: S. Subramanium