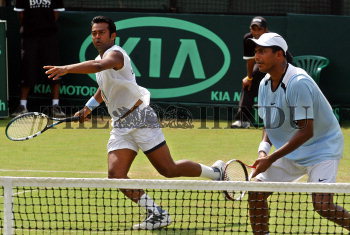 Caption : Leander Paes (left) of India about to play a forehand shot as his partner Mahesh Bhupathi looks on during the doubles match against Jonas Bjorkman and Simon Aspelin pair of Sweden in the Davis Cup World Group play-off tie at the R.K. Khanna Stadium in New Delhi on September 26, 2005. Photo: S. Subramanium