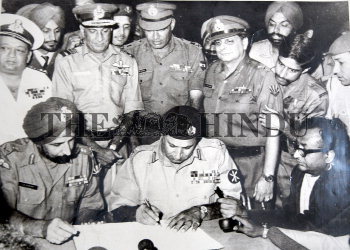 Caption : Surajit Sen, a distinguished and senior newscaster with All India Radio and Doordarshan, handed over many historical letters, photographs and mementos, which he collected while covering the 1971 India Pakistan war, to Gen. J.J. Singh (not in picture), Chief of Army Staff, at the South Block in New Delhi on September 26, 2005. The picture shows one of the photographs in which Lt. Gen. A.A.K. Niazi of Pakistan Army (seated, centre) is signing the SURRENDER documents in Dacca on December 16, 1971. The SURRENDER was made to Lt. Gen. J.S. Aurora (seated, left), GOC-in-C, Eastern Command, Indian Army. Surajit Sen (seated ext right, wearing black coat) is seen covering the event. Photo: Shanker Chakravarty