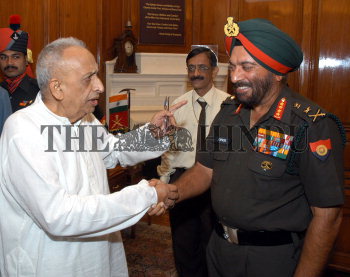 Caption : Surajit Sen (left), a distinguished and senior newscaster with All India Radio and Doordarshan, shaking hands with Gen. J.J. Singh, Chief of Army Staff, at the South Block in New Delhi on September 26, 2005, after handing over to the General the historic letters, mementos and photographs, which he collected while covering the 1971 India Pakistan war. Mr. Sen covered the 1971 Bangladesh war, moving alongside the Indian Army wherein he was a witness to various aspects of the war, including the surrender of the Pakistani Army in the erstwhile East Pakistan now Bangladesh. He collected various letters, photographs and mementos from people who played major role in the war. One such memento is a Pakistani pistol, presented to him by the Indian Army. Photo: Shanker Chakravarty