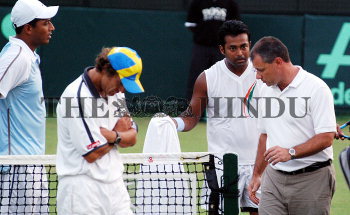 Caption : India's Leander Paes (2nd right) having a word with the Tournament Referee after the doubles match was stopped due to bad light as Mahesh Bhupathi (ext left) and Swedish Captain , Mats Wilander (2nd left) look on during the doubles match of the Davis Cup World Group playoff tie in New Delhi on September 25, 2005. Photo: S. Subramanium