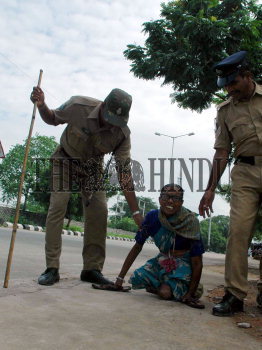 Caption : Police constables help a woman as she crawls to the polling station to cast her vote in Jangaon in Warangal district of Andhra Pradesh on September 24, 2005. The fate of 15,000 candidates in 96 municipalities and 11 corporations will be decided by over 76 lakh voters. The State Eelection Commission has rescheduled polling in 14 divisions of Vijayawada Municipal Corporation due to floods. Photo: Mohammed Yousuf