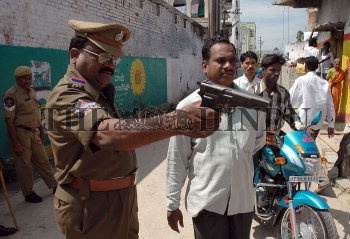 Caption : A police officer gestures with his pistol as he instructs the people to disperse after they had finished casting their votes at Jangaon in Warangal district of AP during the municipal elections in the State on September 24, 2005. The fate of 15,000 candidates in 96 municipalities and 11 corporations will be decided by over 76 lakh voters. The State Election Commission has rescheduled polling in 14 divisions of Vijayawada Muncipal Corporation due to floods. Photo: Mohammed Yousuf