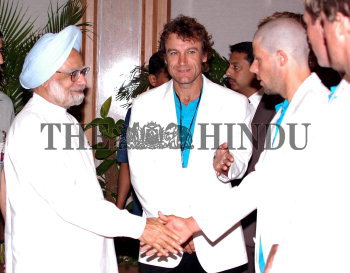 Caption : Former world number one and Swedish non-playing captain Mats Wilander (M) introduces his team player Andreas Vinciguerra to Prime Minister Manmohan Singh, as other look on, at the draw of Davis Cup world group play off between India and Sweden, in New Delhi on September 22, 2005. Photo: S. Subramanium