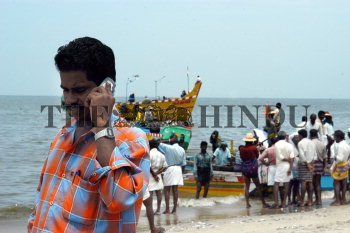 Caption : Kerala's fishermen adopted cellular phones to brilliantly negotiate the price for their catch even when such gadgets were only in the hands of a select few. The growth in mobile connectivity was 22 per cent as against the six to seven per cent in the landline sector, thus making the total connection of mobile phones (28 lakh) and the landlines (34 lakh). A scene from Kozhikode's Kappad beach. Photo: K. K. Mustafah 22/09/2005