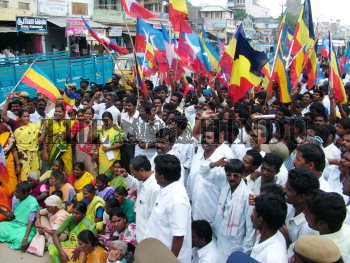 Caption : Supporters of the Tamil Protection Movement including Pattali Makkal Katchi and Dalit Panthers of India on September 21, 2005 staged a demonstration in eight places of Kancheepuram district, in support of their demands, that included among others, making Tamil as the medium of instruction in schools and colleges. Photo: A. Muralitharan