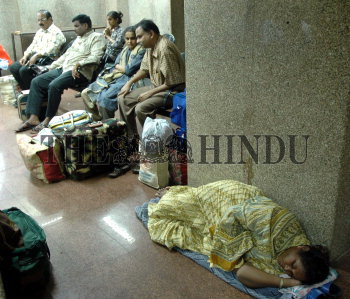 Caption : STRANDED passengers catch up with sleep at the waiting room of the Secunderabad Railway station, following cancellation of several trains, owing to breaches in the Kazipet-Vijayawada section on September 20, 2005. Heavy rains lashed north coastal Andhra and Telangana regions caused by a cyclonic storm, which has weakened and is moving toward central India over Chhattisgarh and it may hit eastern Vidarbha regions in the next 24 hours according to Met office. Photo: Mohammed Yousuf