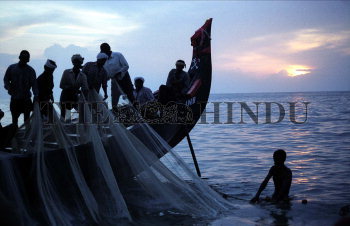 Caption : Fishermen in the coastal areas are now facing the threat of red crabs that cut strongest of the nets using its claws. The menace is reported to be maximum in Kollam and Alapuzha coasts in Kerala. Fishermen say that the red crabs had surfaced from seabed after the tsunami. Photo:Johney Thomas 20-09-2005