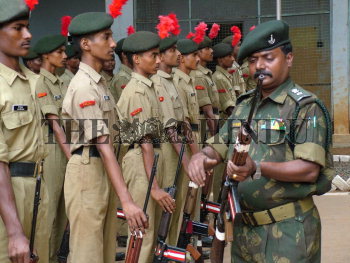 Caption : Lieutenant Colonel V. Alex Chandran, Camp Commandant, is inspecting a rifle drill by cadets during the course of the pre Republic Day Parade, Inter Group Competitions and a Combined Annual Training Camp of the 1 TN Armed Squadron of the NCC at the Triveni Academy, Vadakkupattu village near Padappai in Kancheepuram district, on September 20, 2005. Photo: A. Muralitharan