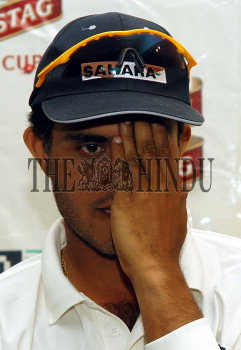 Caption : Indian captain Sourav Ganguly makes a gesture at a press conference held after his team's victory over Zimbabwe in the first cricket Test match played at the Queen's Sports Club in Bulawayo, Zimbabwe on September 16, 2005. India won the match by an innings and 90 runs. Photo: V.V. Krishnan